This particular advertisement was originally released by the organization ” the truth”. Some people may be familiar with their advertisements that appear on networks such as MTV. Their ad’s generally focus on major issues impacting our communities like addiction, smoking, environmental awareness etc. This ad, which was tweeted by the account Smoking Kills, depicts what appears to be a dead body on a table, most likely in a coroners office. All you can see is the bottom of the individuals feet with an ID tag looped around a toe. The tag reads “smoking kills” and the backdrop design of it appears to be the same design as a Marlboro carton of cigarettes. The top of the ad also features information on the statistics of how many Americans die each year from smoking related diseases along with what percentage of these individuals started smoking in their teen years.  From this, we can infer that this advertisement is targeted at younger individuals, in an effort to scare them into not smoking. Basically the ad is implying that yes you are young now, so maybe smoking won’t affect you as drastically as a teen, but ultimately we all end up down the same road if we start smoking: dead.

Texting and driving is another topic that we often come across advertisements utilizing the fear appeal strategy. Depicted here we see a young girl laid out on what appears to be the medical examiners table in a dimly lit room. In this particular ad, you notice the utilization of slang in the wording of the ad and the emoji face placed over the victims face, both done perhaps to appeal to a younger audience or imply that young kids do the majority of texting and driving (even though plenty of adults are just as guilty of this too!). The message is very simple: Don’t text and drive, because it is not worth risking your life. 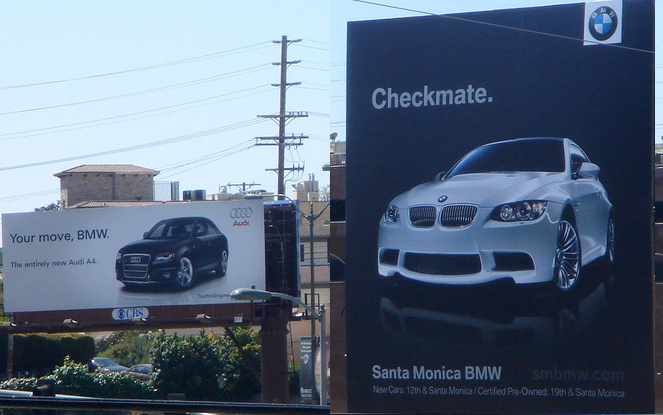 Here we have comedic billboards pitting two popular, long-standing, car manufacturing rivals in the European car market against one another. The first ad featuring the Audi A4 essentially calls out BMW by showcasing their latest and greatest sedan stating “Your move, BMW.”. The second ad, featuring the new BMW M3, is BMW’s sarcastic reply “Checkmate”, a term that is utilized in the game of chess when you are declaring you are capturing your opponents King piece and winning the game. BMW is basically implying that their new model M3 is superior to the new Audi A4 (which in my opinion is true!). The issue with these ad’s is that they definitely do not appeal to everyone. As a car enthusiast I find it hilarious, but somebody who is not into cars, or doesn’t understand the rivalry between these two manufacturers may not understand the advertising strategy or find this humorous. I did notice that in the advertisement for Audi in the bottom left-hand corner the website is advertised, whereas in the ad for BMW, the location and website for the dealership that paid for this ad are specifically listed. This advertisement for Dentastix depicts what looks like a basset hound, drooling over a bird in a bird cage. The bird appears to be passed out/dead from the stench of the dogs breath. The wording reads “against bad breath”. I am on the fence about whether or not this is an effective ad. It is humorous and could appeal to a large group of people (dog lovers, animal lovers etc.). I mean just look at how cute that dog is!? However, it does not give much detail on what exactly the product is. It may prompt somebody to look up exactly what Dentastix are, but the ad itself isn’t very specific. As a dog owner, I am familiar with the product; but not everybody is a dog owner. Additionally, they could’ve done something like list the benefits or the ingredients, or what exactly makes their product so effective.

This site uses Akismet to reduce spam. Learn how your comment data is processed.

Enter your search term and click Search to find an item in the CUNY catalog.

"Apple Abstract 3" by CharmaineZoe is licensed under CC BY-NC-ND 3.0

This site uses Akismet to reduce spam. Learn how your comment data is processed.

Cancel
Need help with the Commons? Visit our
help page Send us a message

Built with WordPress Protected by Akismet Powered by CUNY